Late one late March afternoon NBA player agent Rich Paul, 38, whose professional manner swings between stone-faced cool and startling focus, is chewing through his third tangerine and detailing how he’s been singled out as the reason that two franchises, the league at large, and—why not?—American sports are going straight to hell when something reminds him of his childhood friend Squirrel. “An unbelievable kid, killed for no reason,” Paul says. And for the first time in three hours of talking, his bearing breaks.

“His girlfriend loved him so much, you know what she did?” he says, voice rising as he recalls the brutal last seconds of 18-year-old Starr Hudson and Kenneth Johnson, 21. Now Paul is up behind his desk and standing, transported 18 years and 2,053 miles, from Los Angeles to the battered east Cleveland neighborhood of Glenville: Legs spread, right hand firing at the floor with an imaginary gun. “When the guy was standing over on top of him, shooting him like this, she got on top of him. Guy killed them both. They buried them together. That’s the type of s— that I’ve been through.

“So: All . . . this?” His arm describes a wide arc meant to encompass today’s galaxy of panelists, pundits, vulturous rivals, flummoxed general managers, hoops bloggers: the whole whispery, shouty basketball-industrial complex. “What are we talking about? Do you understand what I just said? She laid on top of him to die with him. That type of s—, that is what’s important to me. I come from a place where there was no way out. How do you get out of there? How do you go from the ’hood to Hollywood? You don’t, right? So the discredit, the disrespect is the one thing I’m not going to tolerate.”

He sits and—just like that—balance is restored. Glenville dissolves, and Paul is again ensconced in the sunny upstairs office in one of those boxy modern L.A. homes (small pool, smaller yard) that you’d call “cute” until hearing that it went for $3 million in 2016. Paul lived here sparingly until last summer, when he spent $4.35 million for another, bigger house nearby and began converting his first buy into the western beachhead for his Klutch Sports Group. Soon after, Anthony Davis, the Pelicans’ all-world big man, fired his agent and hired Klutch, which, though hardly the richest or biggest agency handling NBA talent, has become the most discussed, admired, loathed, ridiculed, daring and feared operation in the business.

Of course, buzz has been a Rich Paul constant since 2012, when he—along with bestie LeBron James—rattled the league’s power structure by bolting Creative Artists Agency and establishing Klutch. It was easy, at first, to dismiss him as a King James tool, yet each new client (Eric Bledsoe, John Wall, Ben Simmons and now 25 others) and brokered contract ($972.1 million, Paul says, and counting) increased Paul’s clout. And nothing signaled Klutch’s raw challenge to the status quo more than last January, when Davis told New Orleans not only that he wouldn’t sign a five-year, $240 million super-max extension with the team this summer, but also that, with a year-and-a-half left on his contract, he wanted to be traded—and Paul made the demand public. 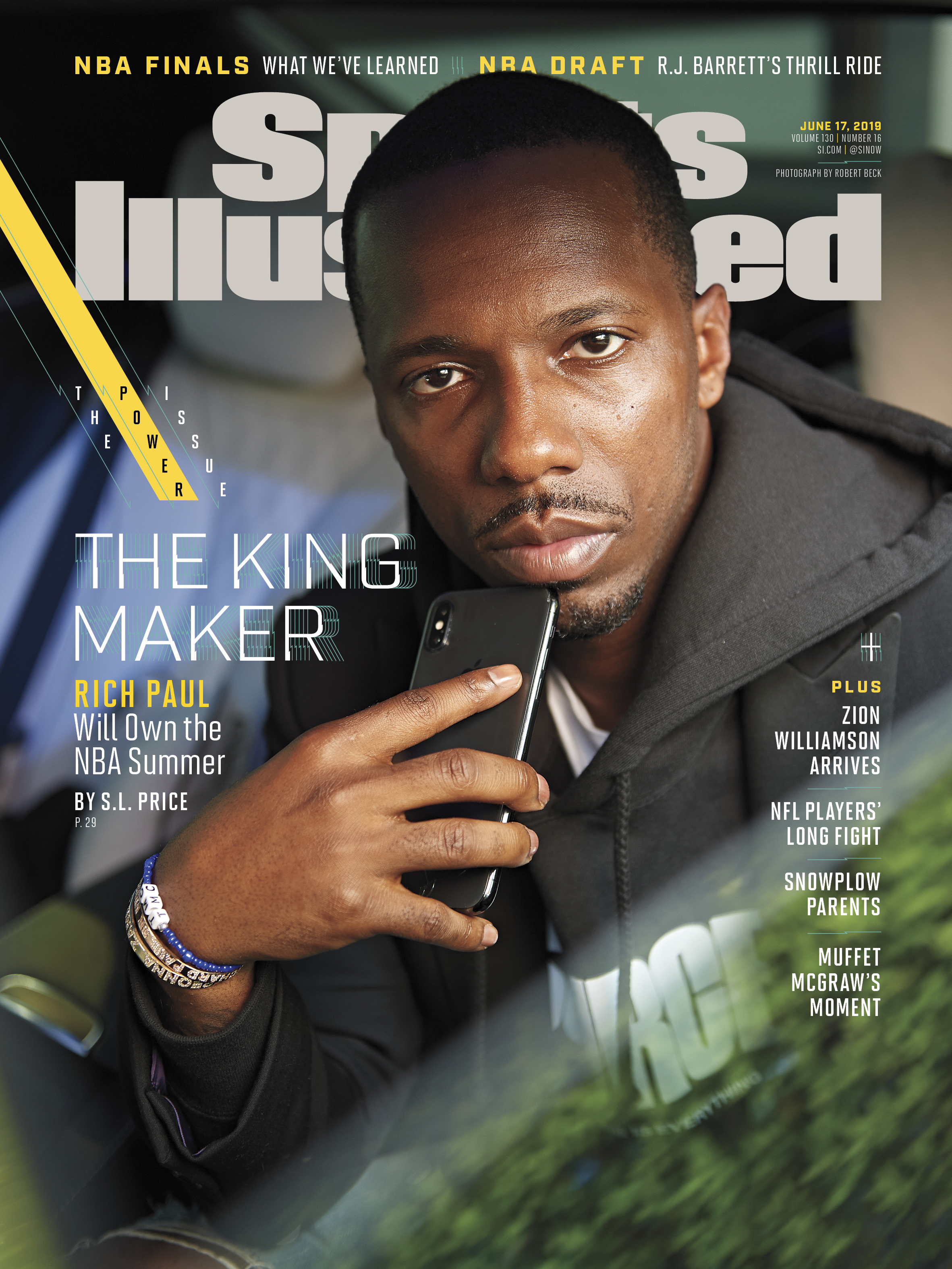 Coming just 10 days before the trade deadline, with prime Davis suitor Boston sidelined by complex contract rules until summer, the maneuver walked and quacked like a demand to send Davis to the rudderless Lakers and, more to the point, James’s desperately welcoming embrace. It was also seen as one of the most naked power moves in recent memory. “We cannot,” Charles Barkley said on TNT, “have players and agents colluding to stack super teams.”

Paul’s Who? Me? protestations aren’t very convincing and, in truth, he doesn’t try that hard. He claims no control over L.A.’s personnel decisions and takes umbrage at the suggestion that he’d send Davis—still, for the moment, a Pelican—into a less than ideal situation to help the man who changed his life and made him rich.

“Did you say that to David Falk? Would you say that to Arn Tellem?” Paul says of two agents who juggled vast stables of clients without charges of conflict of interest. “You’re only saying that because you feel like, ‘Well, Rich wouldn’t be in this position without LeBron,’ right? My thing is: Take LeBron off the Lakers. Are the Lakers not a great destination for an arguably top-two player that went to Kentucky and won a national championship, signed with Nike? For a team that’s had centers from George Mikan to Wilt Chamberlain to Kareem Abdul-Jabbar to Shaq?

“So now, when you add LeBron, that’s what? The cherry on top. LeBron’s 34 years old. Anthony Davis is 26. So when LeBron’s done playing, the Anthony Davis trade is still rolling. What better place to do it than L.A.? If it was L.A.—I never said ‘L.A.’ But there’s no negative to that. Who gives a s— what you’re talking about, about me trying to help LeBron out? No, I’m not. I’m trying to help Anthony Davis. Now, if helping Anthony Davis helps LeBron in the long run? So be it. But my goal is Anthony Davis.”

He veers off to speak of the Knicks as an equally alluring destination for AD. “The only difference is, they don’t have as many championships as the Lakers,” Paul says. “They got a tradition. It’s a big market—not that it’s only big markets. They have cap space, flexibility, they’re able to absorb more than one star. What’s wrong with that?”

The Pelicans? Even though New Orleans landed the No. 1 pick, presumably Duke forward Zion Williamson, in the 2019 draft lottery, and even though its new general manager, David Griffin, is trying valiantly to change Davis’s mind, every report and hint still has AD standing by his demand.

Boston? Davis’s father told ESPN in February that he wouldn’t want his son playing for the Celtics, and Paul confirms that he has warned off Boston management.

“They can trade for him, but it’ll be for one year,” Paul says. “I mean: If the Celtics traded for Anthony Davis, we would go there and we would abide by our contractual [obligations] and we would go into free agency in 2020. I’ve stated that to them. But in the event that he decides to walk away and you give away assets? Don’t blame Rich Paul.”

Posturing? Maybe. But get ready for another year of it, because Paul says Davis won’t be signing an extension anywhere this summer.

Of course it matters: Whatever team Davis plays for next season will be able to offer him more money to stay than any of his other suitors. And though reports have Pelicans owner Gayle Benson loath to do the Lakers any favors, and though many believe L.A. lacks the deftness to pry Davis away, the spin that he would be ill-served playing in purple-and-gold won’t let Paul alone.

“See, everybody wants to fabricate the facts when it’s me,” Paul says. “That’s just like saying, ‘No, A-Rod, don’t marry J-Lo. Are you out of your f—in’ mind, man?’ This is Jennifer Lopez! I mean, who would you rather me marry? The Lakers are Jennifer Lopez. You don’t want me to date Jennifer Lopez? Give me a reason I shouldn’t date J-Lo!” 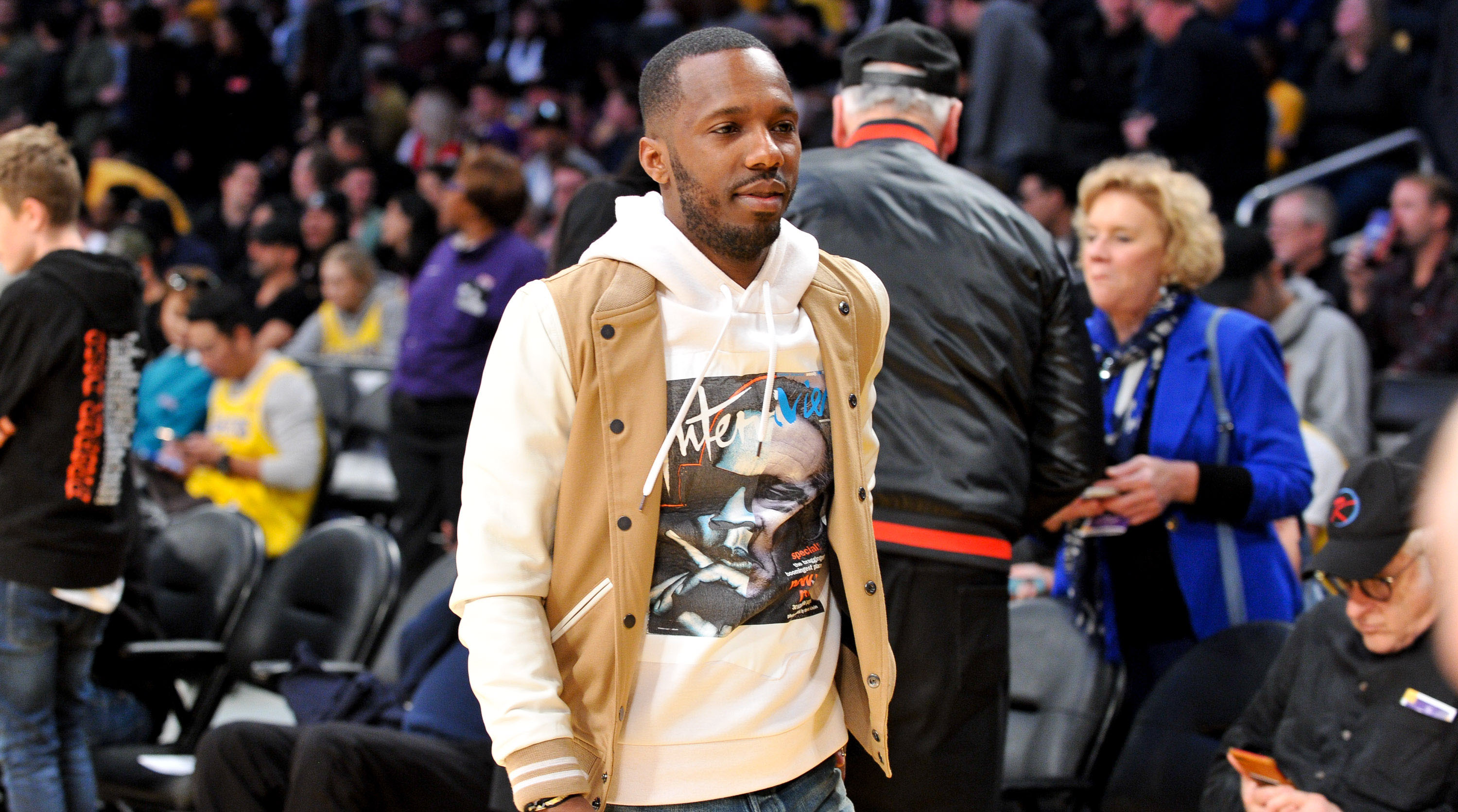 Funny, no? It’s a kick to hear a deadpan Paul riffing outrage, and important to note that he’s good company. For all the high stakes, agentry is at base a service job, and Paul came to it with none of the usual credentials—no law, business or even undergrad degree. Even by non-NBA standards, he’s hardly imposing, with slim shoulders and smallish hands (“I’m 5’8″,” Paul says. He seems more 5’6″. “Come on: 5’6″? That’s f—–’ ri-DIC-ulous.”)

But it’s striking how many who have come into Paul’s orbit, even those critical, offer testaments to his “social talent” or niceness—echoing James’s first impression of hearing “humbleness and generosity” in the tone of Paul’s voice. No one doubts that he can be ruthless and calculating. But he does so while posing question after question, never fronting an expertise he doesn’t possess, and giving the impression that he’ll always tell his truth.

“Rich is a good listener, has humility, has worked as much as anyone trying to learn and, most important, he’s sincere and has an empathy,” says Tellem, Davis’s first agent and, until he took over as Pistons vice chairman in 2015, one of the most accomplished player reps in league history. “So he connects and understands what his clients are trying to achieve. He builds incredible personal relationships, and they believe in him. That’s the essence of a good agent.”

But as the prime facilitator of all things LeBron—whose unprecedented forays into roster assembly, franchise-hopping, and TV and film production have expanded the bounds for an elite athlete beyond recognition—Paul’s every move bristles with a uniquely cutting edge. He has become the go-to agent for the aggressively restless player. “When I’m done [playing] and I’m not around the media every day, I hope that somebody’s continuing to fight off the narrative: You’re the athlete? Can’t have power, and can’t be in control,” James says. “Because you can.”

Money used to be the primary marker of that power, but with the advent of the rookie wage scale in 1996 and ensuing restrictions on max salaries, the expression of clout—and of an agent’s skill—shifted.

“That changed the perspective,” Tellem says. “If the salaries are roughly similar, what can a player control? It’s no longer financial. Where he has his say, then, where he has some control, is in the choice of where he plays and with whom he plays.”

Keep in mind: Agents have long meddled in team affairs. Tellem single-handedly steered Kobe Bryant to the Lakers in 1996, and Falk essentially brokered the 12-player, four-team deal in 2000 that sent Patrick Ewing from New York to Seattle. But with a LeBron-led trend toward shorter contracts now making “pre-agency” speculation a year-round staple, the league seems awash in grass-is-greener syndrome. Or, perhaps, it’s just that top-line talent is capitalizing on increased leverage.

“Other players are seeing the power, influence and control that a great player like James has over an organization, and are striving for that same control, power and influence,” says ESPN commentator and former coach Jeff Van Gundy. “It’s the next level. And now you h