Ex-teammate Kendrick Perkins: Kevin Durant ‘finally got his own team’ as face of the Nets

Former teammate Kendrick Perkins said Kevin Durant has signed on for a “golden opportunity” as the new face of the Brooklyn Nets.

A link has been sent to your friend’s email address.

A link has been posted to your Facebook feed.

The Brooklyn Nets hit the jackpot while the New York Knicks were left with jack squat. USA TODAY Sports Jeff Zillgitt breaks down the winners and losers in the early going of NBA free agency.
USA TODAY

Former teammate Kendrick Perkins said Kevin Durant has signed on for a “golden opportunity” as the new face of the Brooklyn Nets and that the Golden State Warriors were “taking him for granted.”

“They’re going to miss him when he’s gone,” Perkins, a close friend who played with Durant with the Oklahoma City Thunder, told The Undefeated. “I talked to KD and he is happy.”

Durant turned down a five-year, $221 million deal with the Warriors to sign a four-year, $164 million contract with the Nets. The two-time NBA Finals MVP will likely miss all of the 2019-20 season after injuring his Achilles in Game 5 of this summer’s Finals with the Warriors. While Durant’s legacy in Golden State included two championships, the star was portrayed as an add-on to an already title-contending team alongside Steph Curry and Klay Thompson. 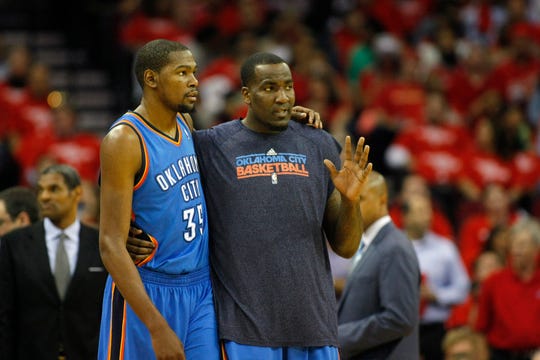 “Finally, he got his own team,” Perkins said of the move to Brooklyn. “It was time for him to leave Golden State.”

Durant will play alongside Kyrie Irving, an All-Star who helped LeBron James win an NBA title in Cleveland before becoming the face of the Celtics — where it didn’t pan out.

“I love it for KD. It’s great for KD and Kyrie to be in the New York area,” Perkins said. “I have no doubt they will co-exist. Kyrie needs to be able to play freely and just be himself and let KD be the leader and the playmaker. I think Kyrie will fall in line. After he left Cleveland he called ‘Bron to apologize to him. He realized that he is not that dude and that he needs to play alongside a guy like KD.”